I have taught critical thinking courses for several decades, and it is always one of my favorite and most satisfying classes. Philosophy is at its best when it draws on many resources, and one of the richest resources for the study of critical thinking is the legal system; after all, the courts and judges and lawyers and juries have been struggling with serious problems in critical thinking for many centuries, and philosophers can learn a great deal from their experience and expertise. When I first started teaching critical thinking, I soon noticed two things: First, that whenever I used an example from the courtroom or the jury room, students became much more interested; and second, that there were a number of standard areas of critical thinking -- ad hominem arguments, the distinction between argument and testimony, legitimate and fallacious uses of appeal to authority or expertise, the burden of proof, analysis of both legitimate and fallacious arguments by analogy -- where the legal community had accumulated considerable wisdom. Gradually I incorporated more and more of that material into my critical thinking course, until at some point the handouts had accumulated into enough material for a textbook: Critical Thinking: Consider the Verdict, now in its sixth edition. The link to the Amazon page is here 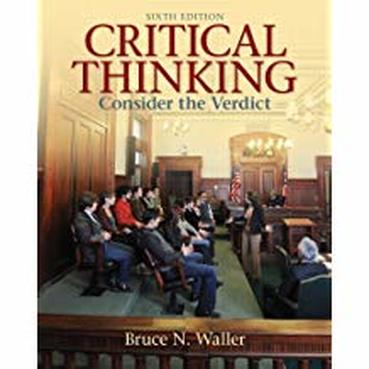